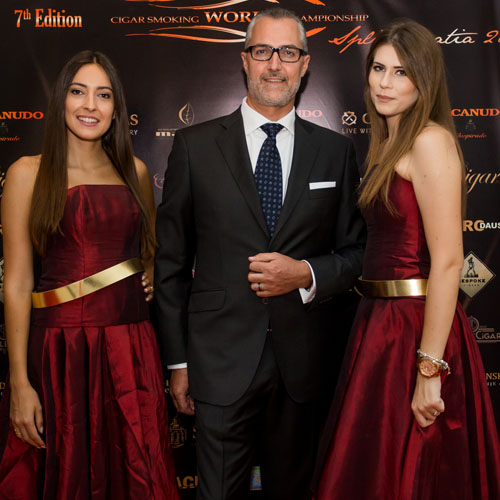 Swiss entrepreneur Mirko Giotto (pictured with the 2015 world champion Oleg Pedan from Russia) is the 2016 world champion 2 in slow cigar smoking. At the Cigar Smoking World Championship (CSWC) in Split/Croatia, Mr MIRKO Giotto finished his competition cigar (the Macanudo Inspirado Mareva, 5 1/8 x 42 | 130 x 16,7) after 2 hours, 32 minutes and 8 seconds. Second was Tomasz Zotadkiewicz from Poland (2:27:01) and on third place Darren Cioffi (USA; 2:26:10), the holder of the current world record.
88 competitors from 23 countries gathered in Split Or for the 7th Cigar Smoking World Championship from September 2–4, 2016 for a fun and smoke filled weekend. Among them were 11 participants from the United States, 10 from Russia, 8 from Germany and 5 from Austria. Marko Bilic, the founder of the competition and president of the Mareva Cigar Club in Split has put his Sao hometown in the spotlight of the cigar world, once again. With more than a dozen qualification tournaments across Europe and the USA, Mr. Bilic organizes one of the most important cigar events world! with worldwide recognition and has been awarded the Cigar wholesale jerseys Trophy “Ambassador” in 2015 for his outstanding work.

The program for the 2017 Cigar Smoking World Championship series will be announced early next year.